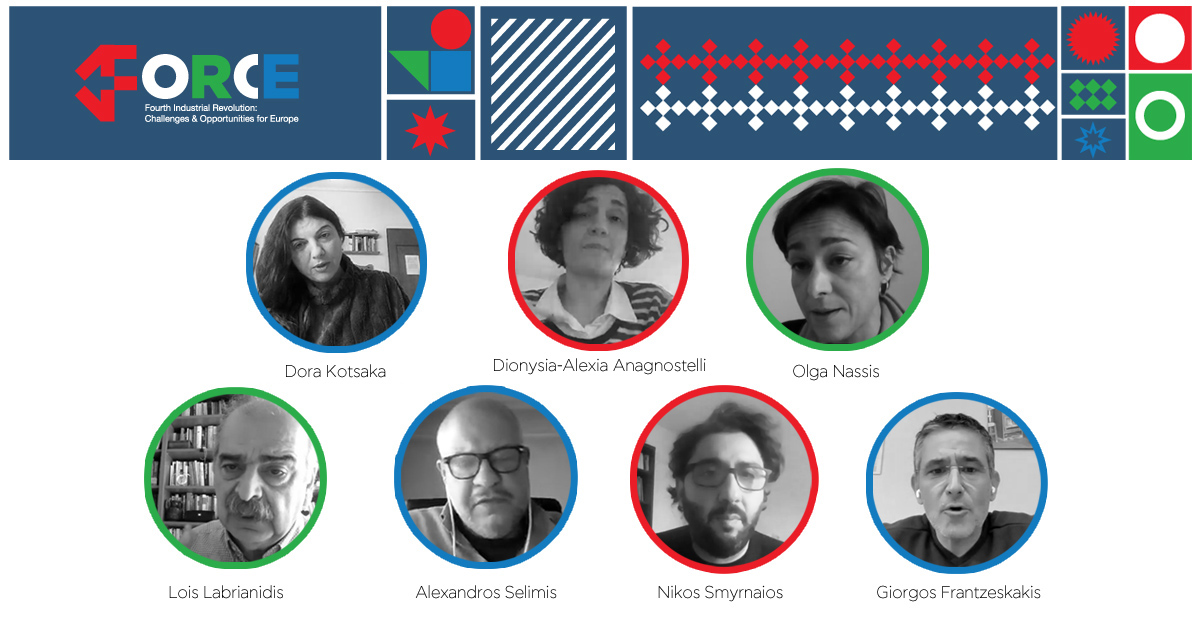 EU initiatives for the Regulation of the 4IR:

Following the FORCE conference (July 2021) and the Workshop on work during the 4th Industrial Revolution (November 2021), FORCE organized a 3rd event -a round table with the participation of policy advisers from the European Parliament- focusing on the dissemination of the conference’s results at European level.

In particular, during the round table:

The work carried out by FORCE showed that there are greatly varying speeds within the European Union as regards the utilization of new technologies. In particular, there are 4 group of countries with significant discrepancies and dynamics (Front-runners, Potentialists Τraditionalists, Hesitants). This fact cannot be disregarded and, thus, calls for a collective response from the European Union, since there is the risk of a further widening of intra- European inequalities. To this end, it is necessary to revise certain policies and approaches. Indicatively, it is estimated that the EU approach in terms of smart specialization tends to trap some less developed countries and regions into unfavorable productive specializations. The discussion of planning an ambitious European industrial policy in order to tackle the said structural imbalances is considered to be extremely timely due to the cumulative consequences on intra-European inequalities caused by the crisis in the Euro area, the pandemic and the economic and technological developments taking place as a result thereof.

At the same time, the dominant approach to brain drain, from the European South to the North, views positively this phenomenon in the sense that it contributes to the circulation of human capital in the European labour market. However, brain drain strips origin countries of specialized human resources undermining, as a result, economic growth and the utilization of the possibilities of the 4 th industrial revolution, and increasing intra-European inequalities. In this context, it is also necessary to deal at European level with the great inequalities in the field of Research and Innovation.

3. The need for strong international regulation of digital companies

As shown by the digital companies’ market capitalization, there is an extremely significant concentration of economic power in the digital sector. The control of Internet users’ data is at the core of this dynamic and the corresponding business models. Thus, it is imperative to establish and implement efficient forms of regulation against the accumulation of disproportionate market power both economic and technological. Only the European Union can establish and impose such a framework in order to safeguard economic democracy, maintain a level playing field, protect SMEs, users, consumers and workers in the digital economy.

It should be noted that the European Union has taken important steps to that direction compared to the USA. The GDPR, the Digital Services Act and the Digital Market Act constitute important initiatives to effectively regulate the digital sector. The recent OECD Agreement on the taxation of digital economy is a historic breakthrough in order to tackle the extensive tax avoidance by multi-national companies. The European Union has announced a draft Directive for the effective implementation of the Agreement in the EU.

Regarding labour, strong concerns have been voiced in relation to the impact of digital platforms on working terms and conditions. The concentration of economic power on the part of labour demand (platforms) -combined with the internationalization of competition on the part of labour supply- causes a “race to the bottom” phenomenon. Thus, regulating digital labour should be made a key priority of the European social agenda. In this context, the relevant EU initiatives in progress (i.e. adoption of a European Union directive on working conditions in platforms) must be supported in order to yield tangible results for workers.

The participation of citizens in the digital era and economy was also discussed at the round table. First, it was highlighted that while users/citizens of digital services play a crucial role in the high profitability of the Big Tech companies, no provisions have been made for institutions and processes as regards the essential and equal participation thereof in the decision-making about the future of the digital sector and the development and use of new technologies, in contrast with the direct and strong influence of corporate lobbying. Second, examples of direct citizen participation in the production of collective value via digital commons were examined. Fields and initiatives falling into digital cooperativism and Commons-Based Production Practices (CBPP) show an alternative model for the digital economy.

Following the discussion, MEP Konstantinos Arvanitis’ assistants presented in detail the European Union’s initiatives that are currently being drawn up, as well as future initiatives in the fields of digitalization, artificial intelligence and new technologies in general, such as, inter alia, issues of sustainable urban development (a field where technology and innovation have a key role to play), the Digital Services Act, issues related to work for platforms and artificial intelligence. In this context, the work of the Committee on Employment and Social Affairs and its relevant opinion on the use of artificial intelligence in the digital market, labour and by consumers were pointed out in particular*.

*OPINION of the Committee on Employment and Social Affairs for the Committee on the Internal Market and Consumer Protection on shaping the digital future of Europe:removing barriers to the functioning of the digital single market and improving the use of AI for European consumers (2020/2216(INI)) https://www.europarl.europa.eu/doceo/document/A-9-2021-0149_EN.html#title9

Last, the discussion was concluded with proposals related to organizing an event in the European Parliament for the purposes of further disseminating the results of the FORCE project to policy-makers, social partners and stakeholders involved in the field of the 4 th industrial revolution. In this context, it was noted that the event should have added value in relation to the existing public debate, that is focusing on the negative impact of new technologies without submitting concrete and applied proposals for addressing negative impacts and supporting solutions that meet social needs. Furthermore, it was stated that the event should point out issues that will attract the interest of other countries facing similar problems and difficulties to Greece’s in relation to new technologies, human resources, Research and Development and their growth prospects within the European economy in general.

– Dr. Alexandros Selimis, Member of the Academic Committee of the FORCE project, 4IR and Innovation Expert, author of the policy paper “The 4IR: Key-issues in the post pandemic era”

– Prof. Nikos Smyrnaios, Associate Professor at the University of Toulouse and author of the book “Internet Oligopoly:The Corporate Takeover of Our Digital World”

Discussion facilitator:
Yannis Eustathopoulos, project coordinator FORCE and co-author (with S. Devves and A. Sotiropoulos) of the policy paper “The dual aspect of the 4IR Environment nexus”.